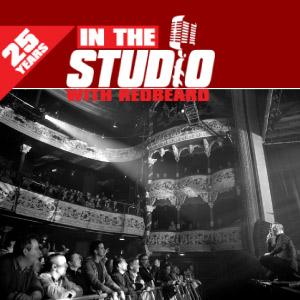 Posted at 21:58h in All News, Radio by Simple Minds
Share
Listen to a great interview with Jim Kerr in two parts online right now!
Dallas,TX- April 5, 2013. InTheStudio.NET, the web home for North American syndicated Rock radio show InTheStudio: The Stories Behind History’s Greatest Rock Bands explores Celebrate: Greatest Hits package from Scotland’s Simple Minds.
The dawn of the 1980s revealed some seismic changes to the popular music landscape. The Punk Rock pimple on rock’s face had popped rather messily by then, never intending to be a way forward but rather a musical meteor crashing into the rock world, killing off rock dinosaurs in order to let new forms of music live. A flurry of fresh-faced bands with exciting new approaches flooded through the breach with names like The Police, The Clash, U2, R.E.M., and Simple Minds. Yet precious few of those bands or their peers exist today simply because navigating the shoals of pop music fad, fashion, and finance are…well…not simple.
It’s quite complex, and to endure over the decades takes a single-minded focus, a yeoman’s stamina, a hunter’s resolve, and a wee bit of luck. Simple Minds co-founder/singer/songwriter Jim Kerr shares with InTheStudio program host Redbeard what inspires him and his band mates to continue to record and perform today.
“There are so many factors that come into play, well, the first one: desire. You’ve got to want it. And you have to continue to want it, and you’ve gotta still want it when you’vehad it.” JK
Listen to part one HERE
Listen to part two HERE