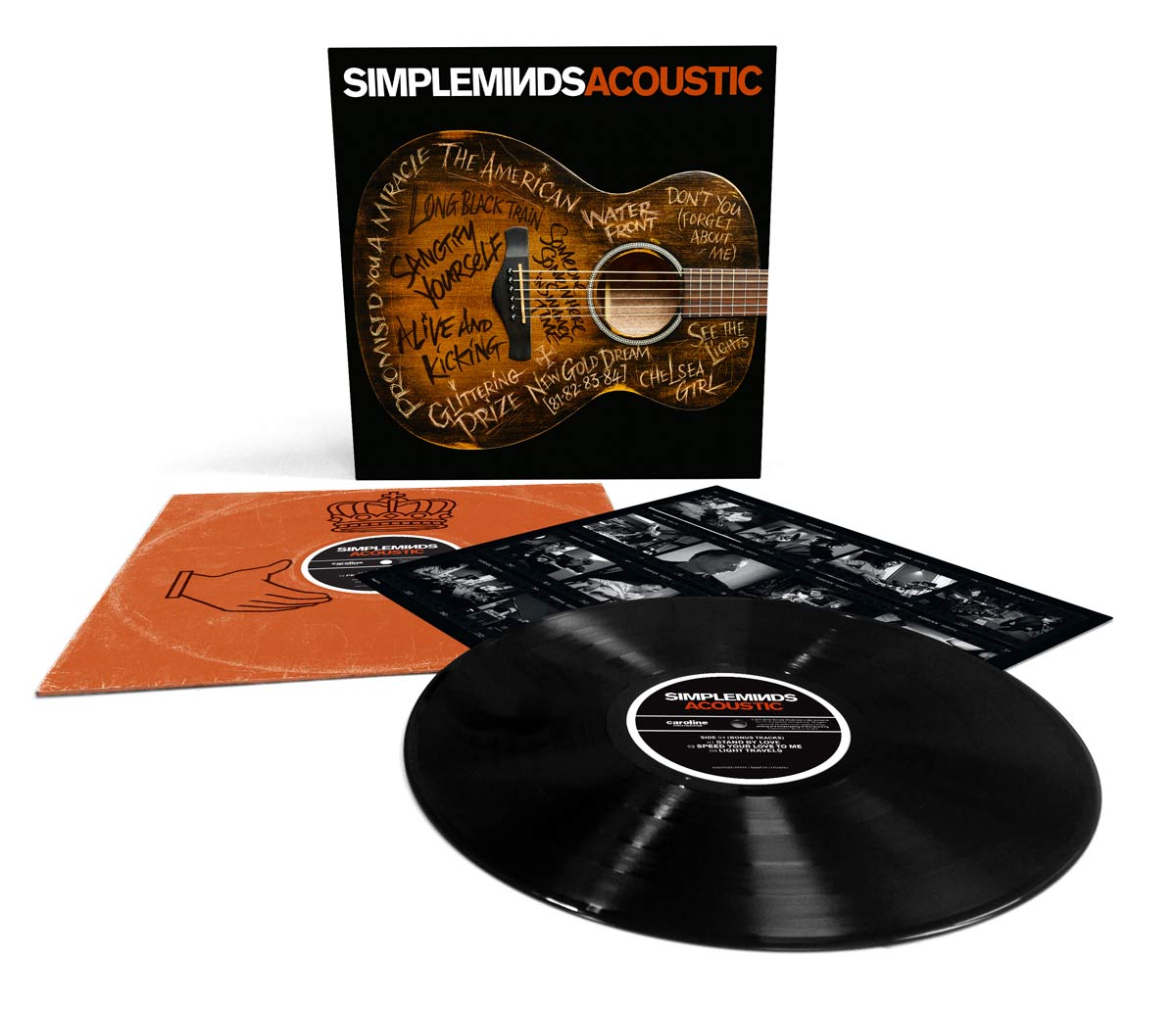 On 11th November 2016 Simple Minds released SIMPLE MINDS ACOUSTIC via Caroline International. This follows several years in which the band has gone from strength-to-strength, becoming more relevant than ever; the 2014 album BIG MUSIC received across the board praise, with MOJO magazine declaring it “their best album in 30 years”.

“It’s fascinating to hear their biggest hits in such a raw & intimate form.”
Vive Le Rock – 7/10

“An earnest, refined take on many of their classics.”
Classic Pop – 3 Stars

SIMPLE MINDS ACOUSTIC continues the band’s artistic quest with a one-off album release of stripped down and re-imagined songs spanning their eclectic and illustrious career. On the lead single Promised You A Miracle, the band are joined by fellow Scot KT Tunstall, whose distinctive vocals, acoustic strumming and rolling bass groove transform a piece of music that was the band’s first ‘pure pop song’ when it arrived in 1982. (Watch it below!)

On SIMPLE MINDS ACOUSTIC the band have found a way of doing the acoustic thing without losing their essence, and a dozen Simple Minds songs loved by millions now sound more organic and even more likely to leave a lasting imprint. The synths are no more – but the Celtic soul remains.

A limited number of copies pre-ordered of this CD were signed by Jim & Charlie ! 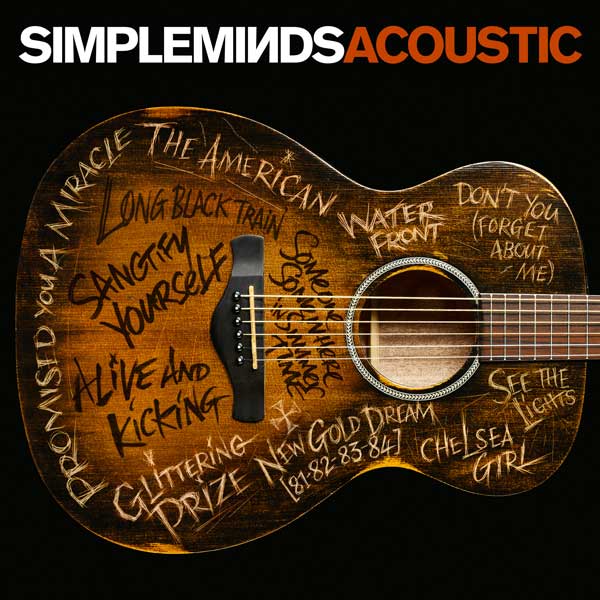 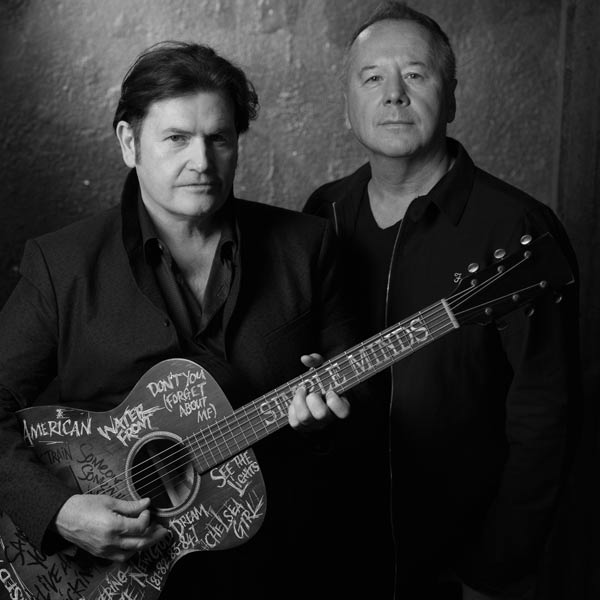 The fact that the album sessions entailed a sentimental return to their Glasgow roots for Jim and guitarist Charlie Burchill helped, with some songs recorded in Gorbals Studio, a former railway workers’ social club located a stone’s throw from the high-rise estates of the city’s South Side where the pair took their first musical steps. It was in this building that Jim and Charlie played their first gig, as teenagers in a school glam-rock band, and emotions were understandably high on their return.

The genesis of Simple Minds Acoustic can be traced back to a rare live session the band recorded for the Chris Evans Breakfast Show in September 2014, promoting their 16th studio album, BIG MUSIC. The reaction, to the band’s surprise, was overwhelmingly favourable.

With this in mind, the band began 2016 by putting together an acoustic set for the Zermatt Unplugged Festival in the Swiss Alps. Having spent weeks working on meticulously layered acoustic arrangements of their best-loved songs for that 90-minute performance, they began hatching plans to record them. With Jim and Charlie augmented by regular bassist Ged Grimes, backing vocalist Sarah Brown, acoustic guitarist Gordy Goudie and percussionist Cherisse Osei, they temporarily halted the recording of the forthcoming sequel to BIG MUSIC – an album that is ‘anything but acoustic’ – and gave their complete commitment to an all-encompassing acoustic project. The recorded versions stick to many of the ideas forged for that Swiss show, with the synthetic sounds of old replaced with warmer effects. 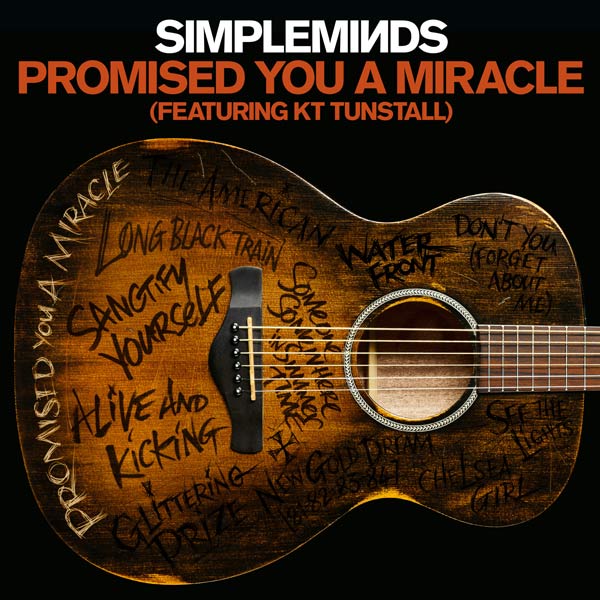 With so much music to choose from, picking a running order wasn’t easy. But there were some numbers that had to feature. A quartet of songs from 1982’s New Gold Dream album, all still performed live, were among them. For Promised You A Miracle, the band are joined by fellow Scot KT Tunstall, whose distinctive vocals, acoustic strumming and rolling bass groove transform a piece of music that was the band’s first ‘pure pop song’ when it arrived in 1982. With regular backing singer Sarah Brown soulfully to the fore, there is also a powerful feminine presence on Glittering Prize, another New Gold Dream song. The two remaining New Gold Dream tracks, Someone Somewhere In Summertime and the title track, add deeper, darker textures while retaining the panoramic ambience of old.

SIMPLE MINDS ACOUSTIC goes back further, too, with Charlie adding Spanish guitar to Chelsea Girl (from 1979 debut album Life In A Day). He also supplies acoustic lines with the feel of Led Zeppelin III on The American, the swaggering song that was the band’s first single for Virgin in 1981. There are later highlights, too, with 1984’s Waterfront joined by two songs from 1985’s Once Upon A Time – Alive And Kicking and a soulful take on Sanctify Yourself. From the following decade, 1991’s See The Lights shows just what can be done when an acoustic guitar is treated with special effects.

The album concludes with Don’t You (Forget About Me), the enduring Breakfast Club closing song that gave Simple Minds a number one single in America, plus a yearning cover of Richard Hawley’s Long Black Train. Jim Kerr discovered the wonderfully moving lament, from the Sheffield singer-songwriter’s 2001 album Late Night Final, when it cropped up on an Alan Yentob BBC documentary about Man Booker Prize winner Richard Flanagan, whose brutal novel The Narrow Road To The Deep North chronicled the experiences of Allied POWs working on the Thailand-Burma Railway in WWII.

As a group who formed in the punk era and found their mojo through a shared love of Bowie, Kraftwerk and electronic dance, Simple Minds are not natural acoustic adventurers, but they have done a remarkable job here, adding fresh nuance to brilliant songs without trampling on sacred memories.

“Our songs mean a lot to people, so we had to be careful,” says Jim. “It wasn’t a case of just knocking up some acoustic riffs. We had to show respect to the songs and retain everything that made them good in the first place, and we wanted to create a Simple Minds party album, not a traditional, introspective acoustic album – more something that people will play during good times. This experience has reinvigorated and excited us about the potential of new songs, which we’ll begin recording soon.”